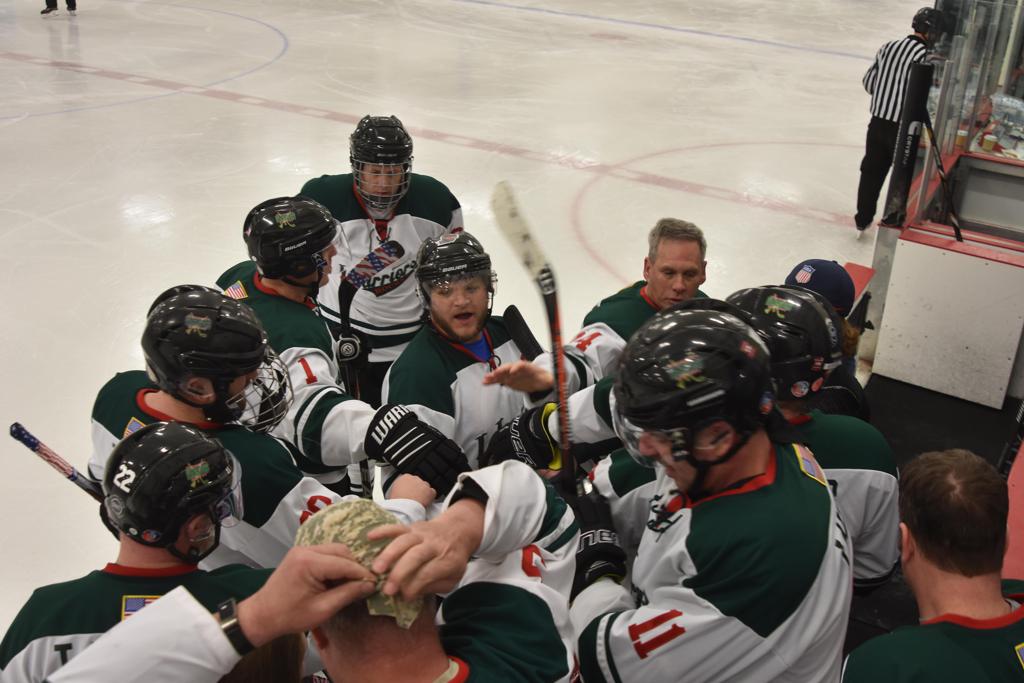 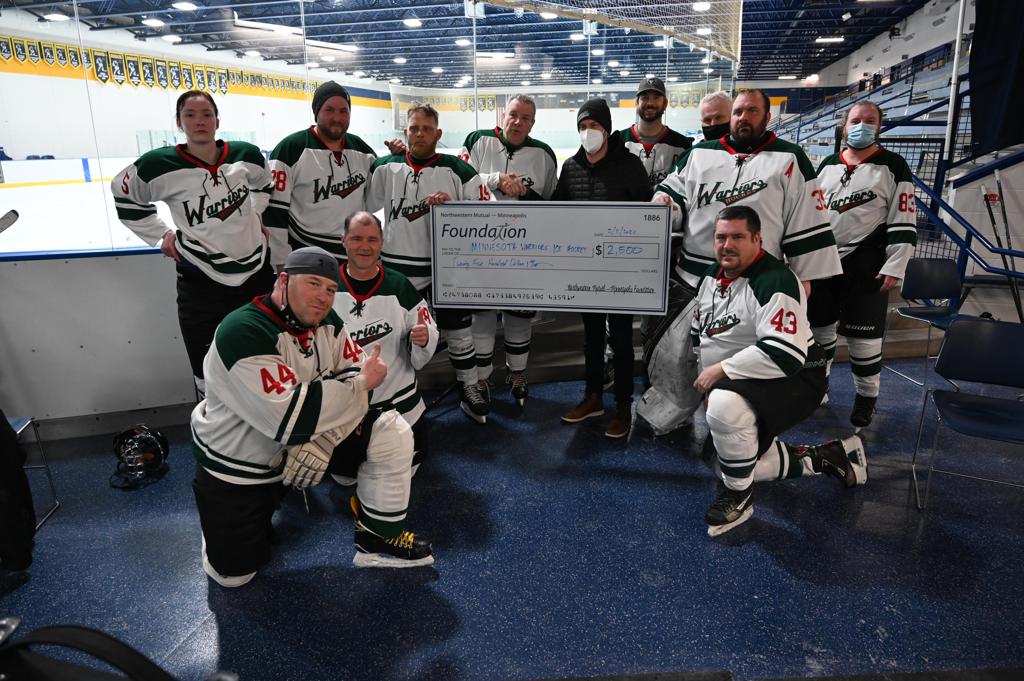 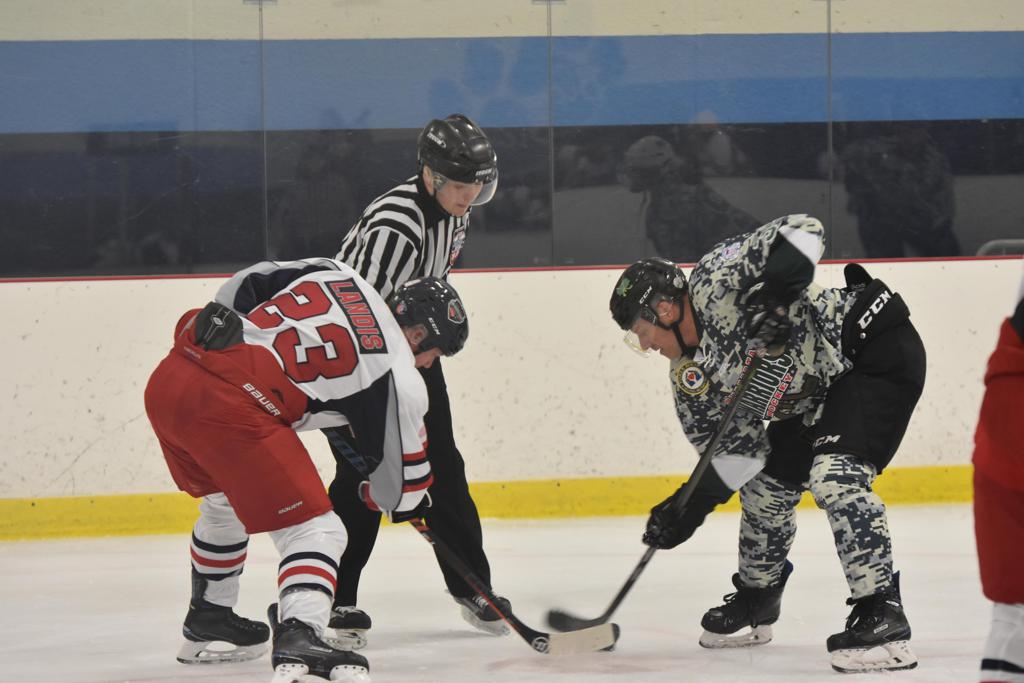 THIS IS MORE THAN JUST HOCKEY, THIS IS HOME!

From the moment the players walk through the arena doors, they are part of the Minnesota Warriors Ice Hockey team. When veterans transition, they lose a critical support network. When stepping on the ice, veterans can get away from the stress of daily life and feel part of a team again.

The feedback from members is a level of camaraderie that does not exist in civilian life. The Minnesota Warriors organization is focused on helping all Veterans in our local community. This is a bond that is built on and off the ice. 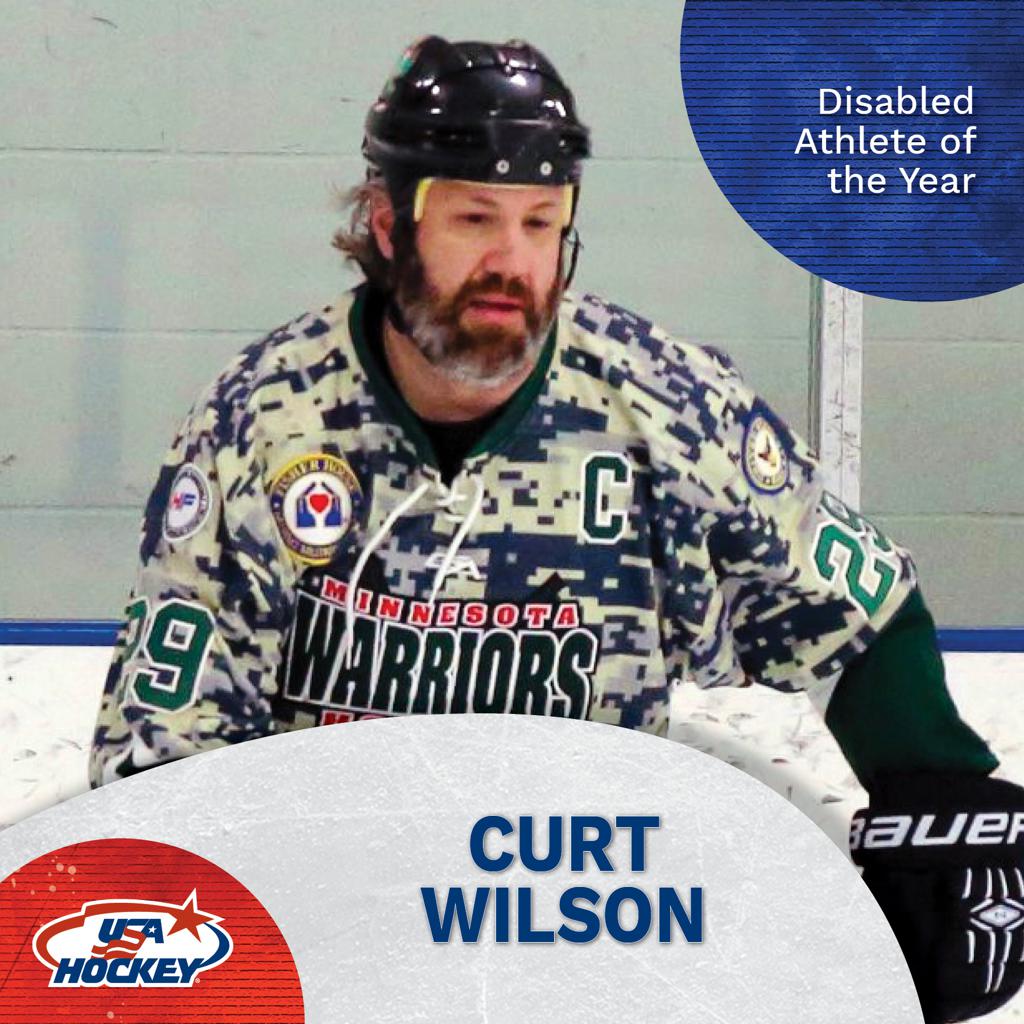 It’s not about the hockey for Curt Wilson.

For Wilson, a decorated military veteran, who oversaw exponential growth of the Minnesota Warriors, it’s about the brotherhood, the camaraderie and just being around the guys that keeps him going.

Wilson has been recognized with this year’s USA Hockey Disabled Athlete of the Year Award. The award annually recognizes the outstanding perseverance and dedication by a disabled hockey player through demonstrating the ability to overcome obstacles in the pursuit of excellence both on and off the ice.

“Having this type of a program allows the locker room to become family,” Wilson said. “On a personal level, if I never played hockey again, I wouldn’t miss it, but I would miss that locker room. I’m always going to continue to be involved, whether it’s on or off the ice. For me, what’s important to me is just simply continuing to reach out and to try and help as many disabled veterans as I can.”

The Minnesota Warriors program is designed to provide a recreational, therapeutic experience and education for wounded, injured or otherwise disabled veterans of the U.S. military, in conjunction with USA Hockey’s disabled hockey program.

The program educates, trains, motivates and encourages individuals who have physical disabilities incurred during service to the United States. The program also uses the game of hockey to develop self-confidence, adjust to new lifestyles, focus on rehabilitation, self-reliance, concentration and help participants back into mainstream lifestyles.

“When I found out, I was shocked, honored, humbled … there were all sorts of emotions,” Wilson said. “My first thought was why me? When I can sit here and name 12 guys off the top of my head, who I think deserve it. I kind of feel like I’m still processing all of this, but it’s truly an honor for me.”

In 2018, Wilson started a Minnesota Warriors team in St. Cloud, Minnesota, after the program already carried a presence in the Twin Cities and Duluth. In three years since its founding, the St. Cloud program has 62 rostered players, equating to roughly one player for every 1,000 residents of St. Cloud. In comparison, if New York City started a team, the same participation rate would yield just shy of 10,000 players.

“It’s humbling just knowing everything that I’ve done for the warrior program and the community, and people have noticed, I guess,” Wilson said. “I’m a very private person, so having this public attention is different for me and it’s a little awkward, but I’m also finding out that I need to be able to just embrace it.”

Wilson, who comes from a third-generation military family, joined the Navy when he was 26 years old. He was deployed to Guam during the 9/11 attacks and later sent to Iraq in March of 2003 for Operation Iraqi Freedom. Once he returned, Wilson’s battalion was awarded the Presidential Unit Citation.

“My tour in Iraq was part of the initial march to Baghdad,” Wilson said. “That was 33 straight days of sustained combat operations, which was a pretty big deal.”

Wilson learned of the Minnesota Warriors program in 2017 when he attended one of his daughter’s games and noticed a flyer.

“The very next day I called, and I submitted all of my documents, and a short time later, I started skating with the Twin Cities team,” Wilson said. “From there, I was able to realize what the program was doing, No. 1, for disabled veterans, but also what it was providing for me. I ended up diving even deeper into the Warriors program by becoming a board member and also the media relations director.”

The program sought to branch out to St. Cloud, which is the same distance from Wilson’s home to Twin Cities. So Wilson volunteered to start the St. Cloud team, which has allowed him to come out of his shell through his involvement.

“I’m a very private person, and I don’t like a lot of things to be public knowledge, but when I’m comfortable, I will talk with buddies about experiences and things like that,” Wilson said. “Just being around these like-minded veterans, it’s a good place for you to feel safe and not judged. This has become more of an outreach to continue to help our disabled veterans and get them what they’re looking for and what they need.”

The team takes part in not only practices and games, but also off-ice activities like golf outings, pond hockey, charity fun runs, pre-skate meals, a yearly all-day barbeque at Wilson’s house and more.

“My teammates have done just a tremendous amount of healing for me,” Wilson said. “They have provided me a place where I can kind of regain a purpose again. Now, my therapy comes from knowing that there’s 60 disabled veterans on our team, who come to the rink looking for something and they’re able to leave with a smile on their face.”

But it’s not just the players. Wilson deliberately creates games and events where leaders include not only players, but also spouses and children, as they incorporate extended families to the team. Family is of the utmost importance for Wilson. His wife, Norma, and their seven kids have always been the foundation of Wilson's support system so it's important to him that all players' families have the opportunity to be involved.

Sometimes, after high-profile games, Wilson has led initiatives for potlucks, catered meals, or pizza delivered to the rink intended for both teams, referees, family and friends to feast and fellowship. After the team’s first game, this resulted in recruiting new players.

“None of us can do any of this solely by ourselves,” Wilson said. “We all do truly need the support from our families in order to do this. It’s just providing a place for all of us to feel like we belong.”

With burgeoning participation numbers, Wilson has regularly removed himself from the lineup to open a spot for another player. While he loves playing, Wilson sees more joy through enabling and encouraging others.

Players have offered support for one another through life-changing circumstances like divorces, deaths, and job loss, in addition to marriages, births, promotions and other significant life events.

“I was fortunate enough to surround myself with people who helped make this successful, and that’s a huge factor in this,” Wilson said. “We created a culture within the program of accountability and being accepted no matter what your circumstances are. We all have our darkness, but we all need to take responsibility, as well, so the culture we created inside of the program does that.”

The Minnesota Warriors Ice Hockey Program has been organized for charitable and educational purposes. United States Military personnel wounded, injured or otherwise disabled veterans. Minnesota Warriors is the only USA Hockey Disabled Warrior program in the state of Minnesota. Our focus is on assisting our veterans with reintegration into civilian life.

Andy Qualy: 'Hockey is my rehab'